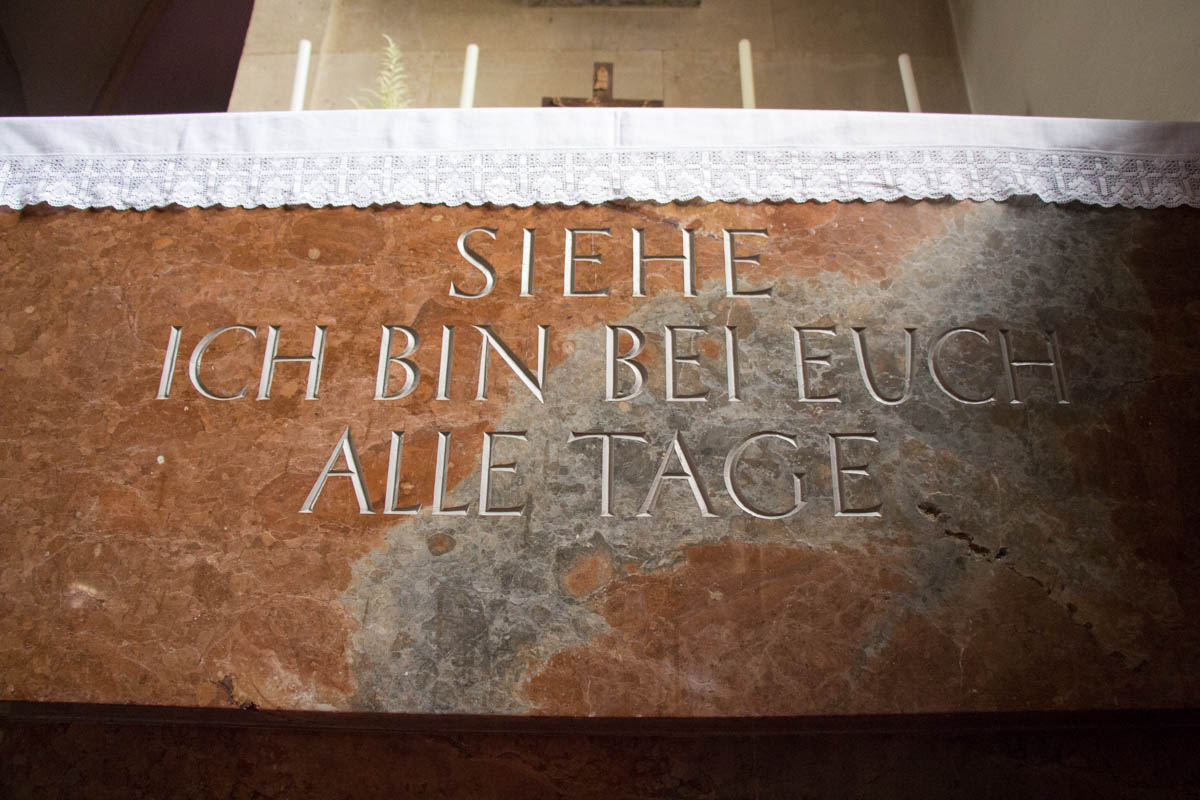 Matthew 28:20 carved into an altar at the Church of St. Ulrich in Rohr im Gebirge. "And remember, I am with you always" (NRSV). / Kyle Walker

Part of an ongoing series on religion and philosophy. Read Part 3 or view all the posts.

When I made it to Mariazell I felt … pretty much the same. On the sixth and final day of “Walker goes to Mariazell,” I walked from St. Aegyd am Neuwalde back up into the mountains, past Hubertussee (a fine lake named for Saint Hubertus), and descended on Mariazell with a nice view of the basilica from the east. Knowing that the end of my journey was at hand, I walked with slightly less concern for the pinched nerves in my shoulders and the worn-out muscles in my legs. I doffed my hat for every wayside cross, but did not change my pace. At shrines outside Mariazell, I paused to read the inscriptions and kept trekking. Described like this, I sound like a killjoy of a tourist, reading the museum placards exactly once and moving on with predictable and ruthless efficiency.

But that wasn’t it. Sure, I was excited to be through with walking for a little while, even if I would miss the constant immersion in the alpine landscape. But I did not rush, and I still had time to get lost a couple times. (The path isn’t exactly perfectly marked on some stretches.) I kept my thoughts directed as continuously as possible on the question: Why am I here? Not the cosmic question about the place of humans and gods, atoms and the void, meaning and meaninglessness, but the more quotidian question why specifically I was specifically there. What did I expect? What was I expected to feel? And how could I work myself into something like the pious expectation that I imagined moving in the hearts of ‘good pilgrims’?

For it must be admitted that skeptical sobriety kept firm its hold on me those six days. I couldn’t find in myself any of the passion that I assume grips earnest pilgrims: repentance, humility, expectancy. I hit on only one—potentially sacrilegious—means to summon some of that emotion. This was to imagine that I was on my way not to an architectural and religious landmark, but to a rendezvous with a lover. Really I can’t help but suspect that the anticipation at the heart of Eros shares more than surface similarity with that which burns in a pilgrim’s God-fever. But appropriateness aside, this wasn’t for me a particularly successful strategy: the charade was difficult to maintain. And moreover I thought of it too late.

It ought to have come as no surprise that I hardly felt addressed (by divinity) while alone in the mountains. In spite of its beauty, I rarely feel overcome by nature as I have by certain human beings. Although to some nature speaks in no uncertain terms of the majesty of its creator, I never saw it this way, was never primed to see it this way, indeed never really understood where anyone got that idea in the first place. That I should be spiritually unmoved by a sojourn in the woods is exactly what all my prior experience prepared me for. Nature surely comes to its own sublime climaxes, and I am no stranger to breathlessness in the face of natural beauty. But the works of nature are mute. People on the other hand are not.

When I arrived in Mariazell and took my place at the back of the nave as a Mass was celebrated at the Marian shrine, faith made even less sense to me than it had when I set out. Strangely enough, I felt the most sympathy for faith when I confronted its artifacts—churches, stained-glass windows, wayside shrines, even the Austrian liturgical handbook—alone. Then I could imagine a connection between “their” social, religious piety, and “my” solitary, so to say philosophical piety. As soon as I witnessed people celebrating their faith, that became more difficult. What place can solitary piety have in Christianity, which is a religion of fellowship, ultimately concerned with how we connect with those around us and with God? (What are the two principle commandments of Christianity? Love the Lord your God with all your heart, all your soul and all your strength; and Love your neighbor as yourself. The existence of contemplative religious orders aside, you can’t love your neighbor as yourself if you don’t have neighbors, that is, if yours isn’t a worldly life with worldly entanglements.)

An unlikely authority for an unbaptized atheist once wrote of faith:

Man comes to deal with God in coming to deal with fellow men. Faith is fundamentally centered on ‘You’ and ‘We’ … The same thing could be formulated from a different point of view by saying that God wishes to approach man only through man; he seeks out man in no other way but in his fellow humanity. [1]

Although I’m generally not down for attributing any predicates whatsoever to the divinity (unless it is acknowledged that all such predication is basically metaphorical and provisional), I find a kind of common ground here with Joseph Cardinal Ratzinger, known rather more in my circles for his conservative stint as Pope Benedict XVI than for his creative career as a theologian. I don’t know whether the divinity, if it is appropriate to speak of it as a person, wants to approach people through people. But I do know that whenever I feel tempted to call upon the metaphorical arsenal stockpiled by religious thinking, and thus make some appeal to divinity, it is in a social context. It is individual persons who to me seem angelic or god-like, not at all times but when something in them thrusts itself into my awareness and shows me that they somehow participate in that something beyond our grasp that we designate by elliptical reference to the divine.

Ratzinger of course has very specific beliefs about the nature of that something—that it is God and the logos, that it became man—and I can’t follow him there. I have a difficult time seeing beyond the formulae of belief to what they are thought to designate. It is intellectually untenable to accept such a obscurantist formula as “one being in three persons” even, perhaps especially, as affirmation of an abiding mystery or as a “piece of baffled theology” [2] and to then insist, in the face of the formula’s avowedly unclear content, that every other Christian do likewise. (This isn’t to say that Ratzinger doesn’t put a remarkable spin on the doctrine of the Trinity. He does. That doesn’t make standing on dogma any more respectable.)

Even if I can’t follow into the realm of the Creed and utter with Ratzinger, “I believe,” I can at least say, “I think I know where you’re coming from.”

This social element, seeking ‘the god’ in others, was the missing piece of my pilgrimage. I did not set out on my quest because I received a personal revelation or because in the course of solitary investigation I hit upon the idea of God. (Which isn’t to say that this is impossible, only that it didn’t happen in my case.) I set out on my quest because of the reports of others: John Donne, the evangelists, my almost-lover back in Albuquerque. Every stage of my investigation required me to heed the utterances of another person and to imagine my way into them, even if, as with the Austrian and expat Catholics I’ve met in Austria, this often results in mutual bafflement. We need other people on our intellectual and spiritual journeys in the same way that we need signposts and trail markings in our physical ones: to tell us that something lies ahead along our path. My company is my compass.

Therefore not solitude but fellowship is the ground, not of all religious experience but of that which opens the door to the divine metaphor. Some can step through the door thus opened and begin to feel in solitude the presence of another (some say of God), much as an author begins to feel his audience as he sits before his keyboard. But as I walked to Mariazell I fell back into that convenient and always available role of the observing atom, separated and self-contained. I ran no risk of being ‘split,’ of being opened to something new, because I could quite easily redefine my journey as a sightseeing trip. I walked alone, and as such I walked with no one for whom the journey was above all a spiritual one and in whom I might have seen flickering—in Plato’s terms—something of the Good. My appreciative encounters with the paraphernalia of Catholicism were a weak substitute for a traveling companion, whether a person of faith or a fellow skeptic. For even in philosophy, solitary “piety” will only take you so far. One must eventually come back down from the uplands of philosophical diversion, look someone else in the eye and say, “This is what I saw.”

My mistake was not to connect philosophical and religious piety. It was to forget that neither comes fully into its own when one is by himself.

2 thoughts on “The Faith of an Infidel [4]: It is not good that the man should be alone”