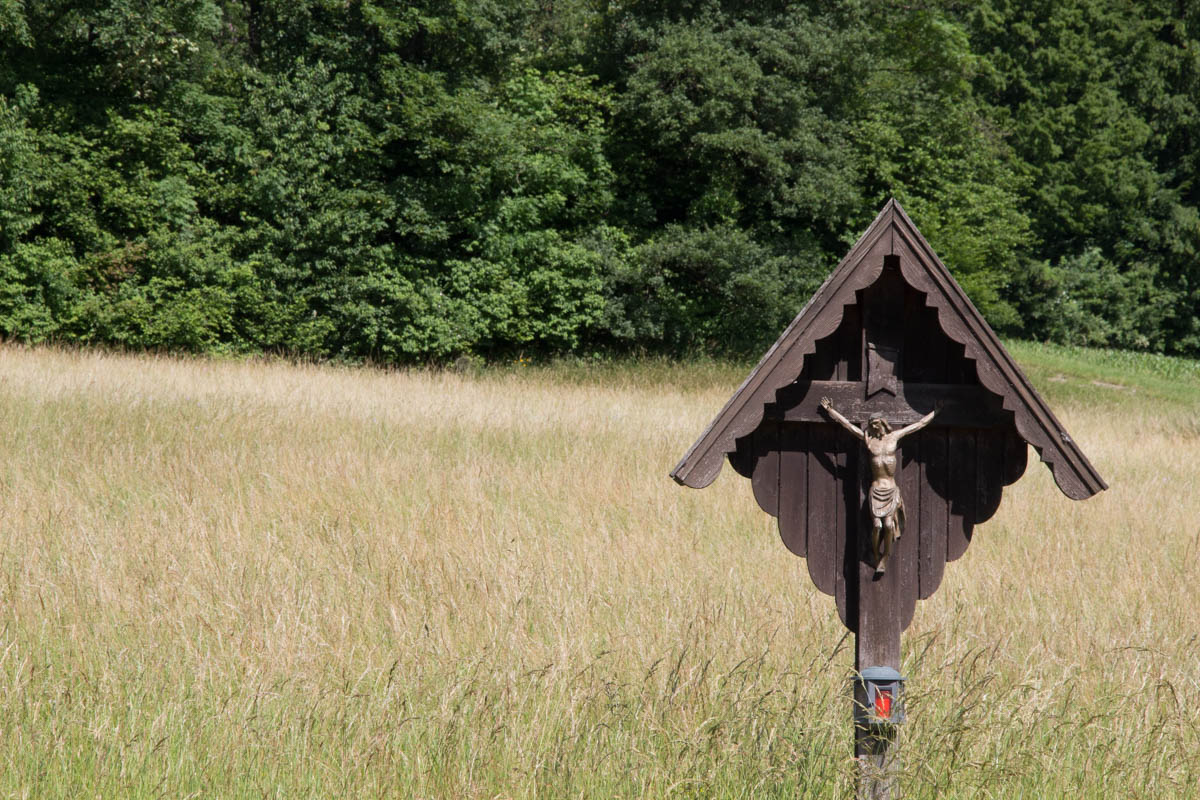 Part of an ongoing series about religion and philosophy. Read Part 2 or view all the posts.

As I write I can look out my hotel window on the mountains to the south of Rohr im Gebirge, a tiny hamlet of 500 people, one hotel, and seemingly no restaurants, nestled in the alpine foothills of Lower Austria. It rained off and on most of the day, and low clouds still float in the narrow draws visible from my terrace. Today marks my fourth day on the trail to Mariazell, a Marian pilgrimage site about 50 kilometers from here. I ought to have gone another 25 kilometers today, but I spent the day in Rohr im Gebirge trying to fight off a cold I caught on my second day. The going is more difficult that I expected. My planned four-day trip has now stretched to six. I blame this mostly on my 30-pound backpack, an object of incredulity to the two other pilgrims I have met along the way, who carried 15 pounds or less. Even after a day spent entirely at leisure, I’m still sore from my feet up to my shoulders.

I’ve thought strangely little about the divine on my trip so far. I stop at the pilgrimage churches to rest and take photographs, and I periodically pause before wayside shrines. I sometimes go through the motions of Catholic piety when no one is around to see it—the business with the holy water and the kneeling and so forth, all of which seems ineffectual at best and impious at worst in the hands of an unbaptized atheist. I never know whether it is more respectful to abstain from such play-acting (if play-acting it be), or to imitate the faithful in an effort to understand them. If I don’t really feel that I’m humbling myself before God, is it a lie to kneel before an altar?

We could ask this question about my entire pilgrimage. If I am not really searching for God, and if I have little understanding of the Catholic interest in Mary, what business do I have trudging to an 850-year-old Marian site? Do I do this in the name of journalism? Of research? And I took the more recently established alpine path, not the traditional Via Sacra, so I can’t claim some kind of justification ad historia (although Kaiser Franz Joseph is said to have once spent the night at my hotel).

So what am I doing besides taking a short vacation in the Alps? I’m afraid I haven’t been hugely successful in explaining this to myself or in giving my journey some kind of higher purpose. As I hike, my thoughts wander from the beauty of the landscape to when I’ll next enjoy a beer at an alpine hut. Although the hike itself is grueling, my accommodations have been comfortable, even luxurious—hardly the lodging of a leidensfähig Gottsucher.

I’m kind of a bad pilgrim. But if I’m a bad pilgrim, there must be good pilgrims. And not coincidentally does pilgrimage make regular appearances in many world religions. Not coincidentally does Christ say that he is the Way, the Truth and the Life. Not coincidentally does Plato describe the (second) birth of a philosopher as a conversion (being turned around) and a journey up out of the cave—and then back down. Not coincidentally, in other words, do people make of physical distance a metaphor for spiritual separation. Indeed, pilgrimage is hardly the most common version of this kind of communion with the divine. Physical places or the proximity of people to one another or to certain objects widely accrue spiritual currency. Not only the shape and orientation of many Christian churches, but also the specific space that they occupy, have or acquire spiritual meaning, either as consecrated ground or as representation. Not coincidentally then does physical geography become the theatre of spiritual journey. (One might ask where else it could happen of course; the meditative and contemplative traditions might say “In the spirit.”)

I’ve walked now from Vienna to Heiligenkreuz to Kaumberg to Rohr im Gebirge. In all around 75 kilometers. In the last stretch, I’m going to ask myself how my physical journey might mirror a spiritual one—without necessarily implying or requiring a conversion experience. It will come as no surprise that my favored metaphor for such journeys is that given by Plato, but I can’t say that I see the Good or that I know in what ‘direction’ it lies. All I can say is that there are moments when I feel addressed, or when I feel I’ve witnessed something that points the way. Not miracles or interventions, but sublimities and epiphanies, the contretemps of our disenchanted world.

And then I can compose without irony lines such as the following, which I wrote in the guest book of the Hotel Kaiser Franz Josef and addressed to the owner Hans Bauer. (Don’t judge my grammar or semantics too harshly; I’m a poet in English first, and German’s hard.):

[From Kieneck I called you,
Arrived only after steep steps
That were for me almost unbearable.
I know however that these await me
Beyond the alpine landscape high and clear:
The Lord, heaven, and Mariazell.]