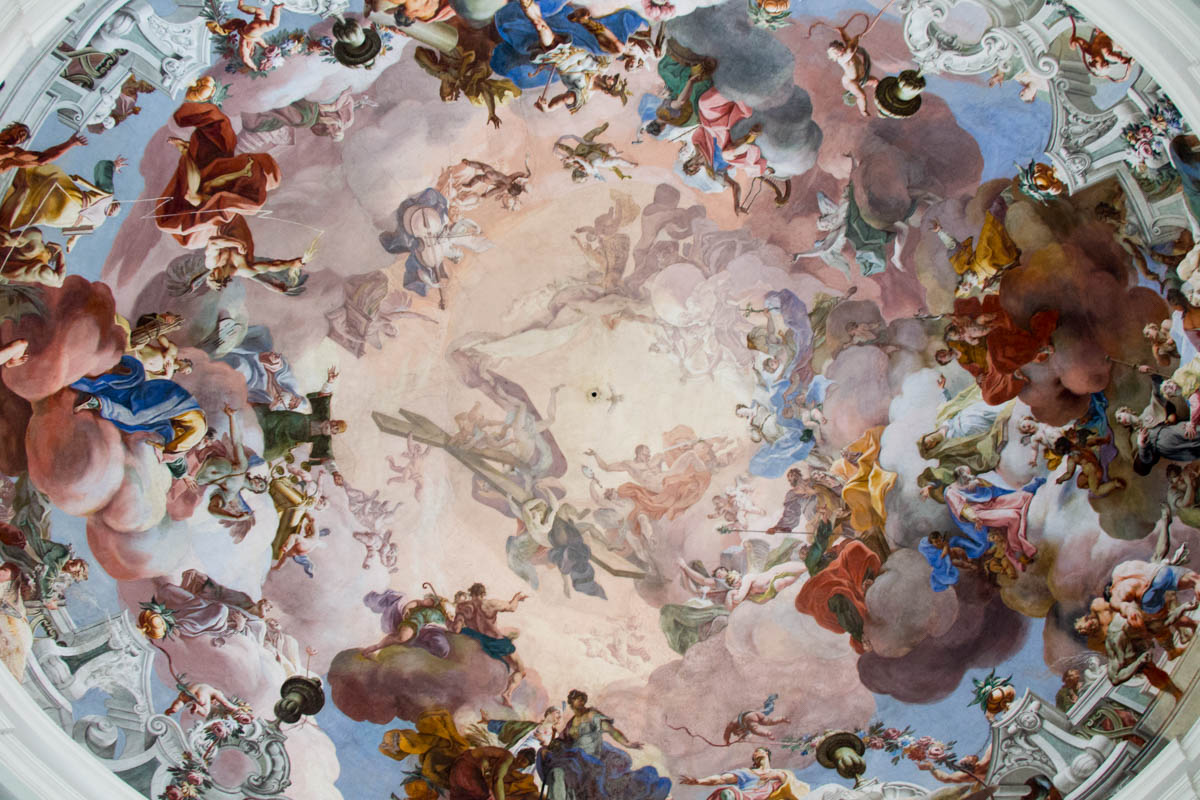 The ceiling painting over the nave at the pilgrimage church in Hafnerberg, Austria. / Kyle Walker

Part of an ongoing series about religion and philosophy. Read Part 1 or view all the posts.

My first appointment on my arrival in Vienna was breakfast with a Catholic mother (whom I will call “Jess”) and her two-and-a-half-year-old son. Jess was born in Croatia when it was a part of the Socialist Federal Republic of Yugoslavia, officially an atheistic state, and she was raised in a not particularly religious family. She was baptized on her own initiative as a teenager. Like most people who learn about my thesis project—concerning Catholicism and the refugee crisis—and my intention to make the pilgrimage to Mariazell, she at first assumed that I was Catholic.

“Actually, I’m not religious,” I said.

“Perhaps you will find something on your way to Mariazell,” she said.

“He comes to you at His own time.” (This seems to be what happened with her.) And then: “There is no doubt that He is the Father.”

Of course, I’m not going to Mariazell because I’m seeking a conversion experience. I’m too much dyed in the colors of skepticism and secularism for that. Rather I seek some wider/better/deeper understanding of what ticks at the heart of religion (if there be such a thing) and whether and how it differs from the core of philosophy and literature. Already I have a hypothesis about this, much of it shamelessly adapted from Walter Kaufmann’s Critique of Religion and Philosophy.

My core hypotheses are as follows:

And finally in the beatitudinal mood:

To my fellow atheists and agnostics, these final propositions will seem like religious nonsense. “What is blessedness?” “What is divinity?” “Can you point to these things in the world?” No. But all that misses the point. As secular people opposed to all the dangers that come with religion (dogmatism, abuse of authority, senseless divisions over matters of ‘doctrine’), we closed ourselves off to the modes of experience and expression of which religion makes use. Because we rejected the literal truth of religion, we also rejected the power of its metaphors. Usually, atheists and agnostics trumpet the power of literature and art when someone points out the lost cultural vitality that comes with the rejection of religion. But this is insufficient. How many of the metaphors in literature and art owe nothing to religious sensibility?

I won’t reject the possibility that a revitalization of religious metaphor will do more harm than good. That remains to be seen. But in the mean time there is much to be gained from considering the idea that religious talk is not primarily about a being called God, but about ourselves. It’s not clear whether this proposition is compatible with sincere religious belief.

As an example, consider Jess’s remarks about my pilgrimage, that God comes to people “at His own time” and that “there is no doubt that He is the Father.” For a religious person, these sentences attribute properties to another being; they say something about this being’s decision-making and its place in the universe. But one ought also to ask what prompts people to say such things. In Jess’s case, she came to Catholicism as a teenager, rejected God during the war in Croatia, and returned to belief later. When she looks at her own history with the faith, she sees the ebb and flow of belief; she sees a comedy of human fickleness and divine patience. She told me on my second day in Vienna that God has a sense of humor: he wasn’t angry when she gave up her faith during the war, but when she came back he did say “I told you so.”

“At one point, I thought that He wanted me to enter a religious order,” she said. (At this time she had been waiting many years for a husband but meeting only “idiots.”) “At the first convent that I visited—this was in Paris—I went to my cell, picked up a Bible and opened it to a verse at random. And do you know what it said? ‘Arise and go.’ Arise and go!”

Jess’s assertions about God—that he works on his own schedule, that he has a sense of humor—are just as easily interpreted as descriptions of her attitudes toward her life as they are theological propositions. And as attitudes I can understand them. I have myself previously joked that the universe is a machine for manufacturing irony—not far from the the idea that the ruling intelligence likes jokes. And neither of those need be taken literally: I don’t think that there is a ruling intelligence that we’ll all meet in the next life any more than I think that irony is something made. For me these expressions encode non-propositional impressions that we have of the world. Not sentences of the form “S is P,” but pre-propositional attitudes, our jokes and stories of which are a means of taking others by the hand and bringing them, even momentarily, to see the view from the top of our hill.

P.S. This doesn’t begin to address the communal nature of religious practice, something that is not implied by my interpretation of religious sentences. This I’ll have to address at a later time.

One thought on “The Faith of an Infidel [2]: God has a sense of humor and other hypotheses”