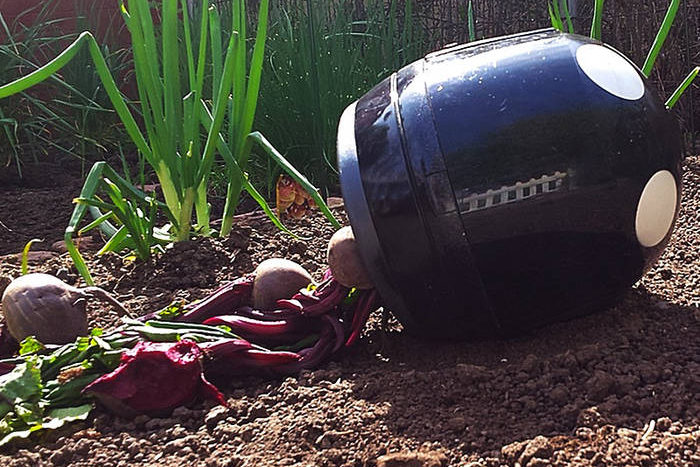 On our continuing mission to unmask the mysterious Breakmaster Cylinder, we sought out the secretive electronic musician for a lengthy interview. BMC agreed, under one condition: that we use a text-only method. We interviewed the Cylinder by electronic carrier pigeon.

Conor: In the spirit of dorky icebreaker games, I would like to know the following:

Would you rather a) have to compose an entire album only sampling from a single artist of your choice, or b) have to compose a single song where you must take all samples from the Neil Young song “The Needle and the Damage Done”?

Breakmaster Cylinder: Is it shameful to admit I don’t know that song without googling it? or is the “Neil Young” in the question really more the point? I choose b), either way.

Kyle: I think the “Neil Young” is more to the point.

Making the drums would be tricky, maybe. But I quite like acoustic samples.

Kyle: “I choose (b) either way” is probably a great response to many dilemmas. What makes an acoustic sample extra special?

Breakmaster Cylinder: Timbre. Some tangible quality, sometimes harmonics, room noise. I can synthesize all kinds of stuff, but most tracks need some gritty recording in it somewhere.

Kyle: Room noise! As a sometime radio journalist, I endorse this view.

Conor: So when you’re sampling do you feel some obligation to add something of your own to the song?

Breakmaster Cylinder: No…I just like what sounds good. It needs to be something i enjoy being lost in on loop—the loop being the project file looping whatever it is I’m working on, not that the song necessarily loops. Definitely a coping mechanism, writing music. For some.

Conor: How many times would you say you listen to a given section that you’re going to sample/remix?

Breakmaster Cylinder: Before it goes in? Just once probably. Once it’s in there I listen hundreds of times just to fine tune in the sweetest way.

Kyle: When you’re chopping your beets, So do you listen to them on loop making changes as they pass?

Breakmaster Cylinder: Yeah I think that’s right actually. Polish a small section over and over, go on to the next. polish that one, listen to them together. Make changes now that you have broader context, etc. But I think that’s how you do lots of things.

Kyle: I polish my beets. I like shiny beets in my borscht.

Conor: There’s a scene in the movie “Frank” where they’re in a cabin, and they’re running around the woods with tape recorders trying to get found noises. On a scale of 1 to 10, how accurate is that?

Breakmaster Cylinder: Oh sure, that works.

Kyle: Have you done that?

Breakmaster Cylinder: I sample a lot but not for any real purposes usually. Sometimes I just drag the contents of recorders out and see what sounds good.

Conor: What’s one recording gimmick that you think other artists use too often?

Breakmaster Cylinder: I recognize some but I don’t know that I’m annoyed by any in particular. Sidechaining is obvious, autotune is obvious.

Kyle: Dumb question: What is sidechaining?

Breakmaster Cylinder: Not a dumb question at all. In most club techno there’s a pulsating synth sound—it sounds like separate notes, but it’s often actually one long note…

There’s a separate channel with kick drums. Whenever the kick hits, it triggers a sidechain on the synth track to dip the volume way down, and then come back up gradually.

Daft Punk is crazy for this—hold on, I can think of one…I thought “One More Time” did it but it’s not that obvious.

Conor: It would be that song. Daft Punk at their Top 40-est.

So here’s the follow-up: What’s one gimmick that you use too often?

Breakmaster Cylinder: HMMM…I use the same instruments a lot. I’m writing in 5/4 a bit too often but it’s fun. My neverending gimmick is manually glitching wav files in little pieces—no plugin, just chopping little pieces and cmd+D to duplicate

Breakmaster Cylinder: There’s a fair amount unreleased. I can give you two though.

I’m working with Dislotec to make a rap track in 5/4. I get that it’s pretentious. But it just makes me glad.

Kyle: No, I’m actually in love with time signatures like that. They don’t get enough love.

Sure enough, Breakmaster Cylinder’s mention of this uncommon time signature brought out the geeks in both of us. The conversation began to unwind into disparate threads; Conor and BMC traded observations about classic prog rock (BMC loves Yes’ “Going For the One”), while Kyle tried to drum up interest in his putative iambic pentameter rap group. Meanwhile, Breakmaster Cylinder started to ask questions about us, including “what’s the connecting thread in your weblog articles?” At this point, we realized it might be best to focus on Breakmaster Cylinder again.

Kyle: Okay, here’s something I want to know: What track best channels your innermost robot?

Breakmaster Cylinder: Define innermost robot, if you please. Resonates most with me? Or is literally most robotic?

Kyle: Hmmmm … That was supposed to be a kind of Rorschach test kind of thing where you accidentally reveal part of your identity by making an assumption about what we mean by “innermost robot”

Breakmaster Cylinder: Oh fine…Pineapple Princess is probably the loudest, dumbest one. And makes me pretty happy everytime i hear it. Honestly every song I’ve bothered putting on an album means a lot to me for one reason or another. I’d have to think about which one got it most right. Cause they’re all um.. you know. Translated sort of.

Breakmaster Cylinder: You try and express something best you can and it’s never exactly right.

Kyle: “Did Beethoven create his symphonies for his glorification? I don’t believe it. I believe he created them because the music in his soul demanded expression and then all he tried to do was to make them as perfect as he knew how.” ~ The Razor’s Edge

Breakmaster Cylinder: THAT is a very lofty comparison. I do think it’s likely true. Don’t compare me to Beethoven though. I’m just like sitting behind the curtains hitting things.—Editor’s note: We’re pretty sure this is a reference to Breakmaster Cylinder’s only live performance on YouTube.

Kyle: I specialize in lofty comparisons. That’s what they teach you in philosophy classes.

Kyle: I believe we have two final questions for you, oh behind-the-curtains-thing-smasher.

First: at the Rail Gaze we have created a running tally of alternative names for you and we want to know which one you think is best. The options are:
CrushEarl Pyramid
CrackDuke Sphere
SmashMaven Prism
PulverizeSovereign Parallelogram

Breakmaster Cylinder: I’m biased because I’ve heard you say SmashMaven Prism before, and the second time you hear something it always sounds better.

But that is badass…I really like the others…I choose SmashMaven Prism, for sure.

Kyle: It is decided

Conor: Ok, Let’s get to the point, Breakmaster Cylinder, if that really is your name. Over the course of this interview, you’ve expressed your appreciation for prog rock and compared yourself to a translator. Are you Neil Peart AND Robert Pinsky, together inside a trench coat?

Kyle: https://t.co/ROJWDqjZTN. There are obvious similarities between this and “Pineapple Princess.”

Conor: Shit! I have confused Robert Pinsky and Steven Pinker. I shall never live this down! Robert Pinsky was clearly a better option anyway, and since you did not deny it, that proves we are right.

Do you feel as though this was productive?

Conor: We’ve got some nuggets

Breakmaster Cylinder: Yes, twas lovely! Thank you for even caring. I appreciate it.

Kyle: I live in Queens, so if you’re ever in New York and want to make a helmeted visit to a liquor-serving establishment, let me know.

Breakmaster Cylinder: Ooh! I passed through there recently. I’ll let you know if that happens again.

Conor: Enjoy whatever festivities lie ahead!