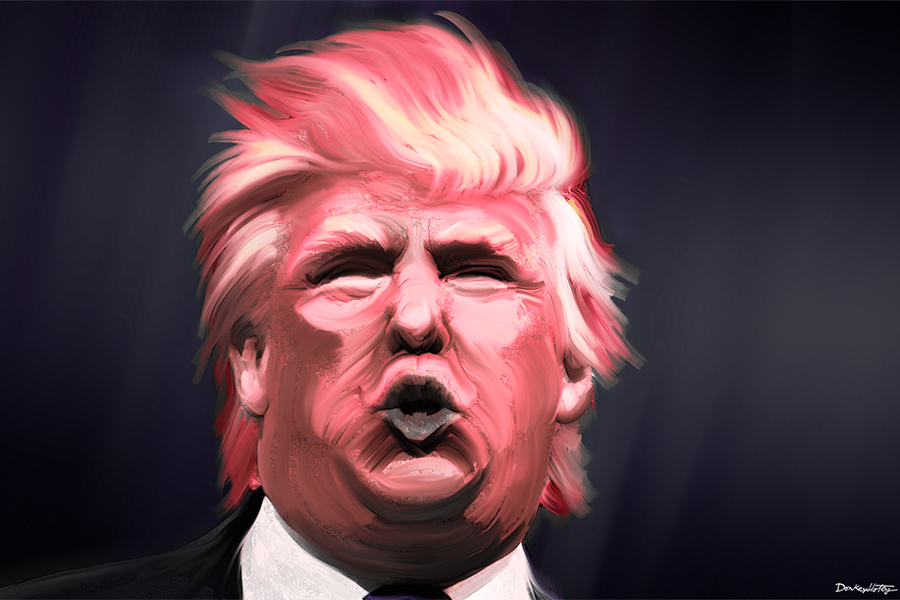 The Rapturer / Original caricature by DonkeyHotey

They’re coming, and it’s not going to be pretty.

They’re coming in here and they’re gonna take your jobs and this country’s gonna go to hell, but you know what? I’m not gonna let it happen. And on November 8th, you’re gonna put Trump in the White House and it stops on Day One, okay folks? Day One.

In my first action as president, in the very first hour, this tremendous wave that’s coming across the border will come to an end. We’ll build a great wall on our southern border, and you’re going to start winning again. You’ll win so much you’re gonna say, “Mr. President, please, we can’t handle all this winning, do we have to win on everything? We win too much!”

But today I have a new promise for you. We need a leader who can get the job done where politicians and crooked bureaucrats have failed you. We need someone who can finally do for the human race what it deserves: total and utter extinction from Planet Earth.

We need to get gone, folks. We’re not supposed to be here. And I was the first one to talk about this. And a lotta people have said, “This place is too hot, we’ve never seen this before, the ice caps are melting, what are we doing?” And I say come on, folks. Are we really this stupid? We’re gonna cool down the planet with what, a big fan from space?

But, and listen closely folks, you’re not gonna hear this from Crooked Hillary: we gotta get everybody gone. Outta here. Boom. Over. Gone. Nothing. It’s done.

I’m not talking about sending folks back across the wall, I’m saying send all these people, everybody, and that’s you and me too, out where they’re gonna be better off. I’m talking the big wall. The wall you can’t climb back over. We gotta take the people of this country and round them up, and send them on right out of here. Everyone, out of here.

Completely. Out of this world. Dead. Everyone needs to die. A lot of people have said, but I said first, these people, you can’t have all these people alive anymore. They’ve gotta stop living or we’re not gonna have a country anymore. Period.

I’m talking about Total. Nuclear. Annihilation. That’s what this is. You win the election, you put your hand on the Bible, they give you a guy in a suit and he’s got the button right there in his briefcase, he says, “Mr. President, would you like to blow up a country?” and I say, “Geez, they just let anybody have this?” I mean, who has the authority, can you believe it? Such horrible, horrible damage. You push the button and boom, it’s gone.

But you put Trump in as president, I go in there and the first country I blow up, it’s America. It’s America First. We don’t win anymore, we’re a joke to everyone and we gotta change it. Let ‘em look at America and say, “Hell, our guy doesn’t have the guts to blow up his people, but Trump? He did it!” No one will mess with America again. And then Vladimir takes care of the world, would that be so bad?

I get in, first thing I do is blow the whole place off the map, and I mean nothing’s gonna be left. They’re gonna rush to get in here before I build the wall, and when I do they’re gonna wish they stayed home. We’re taking all these people, we’re taking the criminals, we’re taking Hillary and we’re getting out of this hellhole.