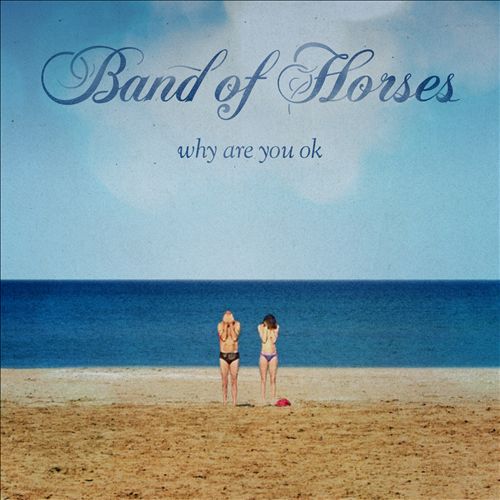 As perennial Band of Horses fans, Conor Fellin and Will Boogert both knew that they would have strong feelings about the band’s new album “Why Are You OK.” So rather than let one person have all the fun, they thought they would write a dialog about the new album.

Conor: So I think for me the thing that most stands out about this album is the influence of Grandaddy’s Jason Lytle behind the helm in production.

Will: What other stuff has he done?

Conor: Grandaddy is a fantastic band. If you haven’t listened to them, then I think I must ask how important you think your plans for tonight are, because you should catch up right now. And I think you can hear a lot of Grandaddy’s sensibilities (particularly from their album “Sumday”) in the tempo of “Why Are You OK” as well as in some of the more surprising sounds we hear in the background throughout this album.

Will: Do you mean how the first three sounds you hear come from a synth and a drum machine? And how the first track is just about the slowest BoH song in their whole repertoire?

Conor: Yeah, really just the weird percussion intros throughout this album. Also, the siren-esque keyboards in “Hag.” At any rate, you mentioned “Dull Times/The Moon,” which I think is one of the highlights of this album.

Will: I thought the opposite. At least on the first listen. On my second, I kind of see where they’re coming from.

Conor: It’s slow, but it’s slow in sumptuous and dreamy way. Also, all that slowness really pays off in “The Moon,” which is more of a return to their classic anthemic garage-rock choruses.

Will: I think it’s a track that will grow on me. But as an album opener, all I could think was “Oh my god, when can we get to the rest of the album?”. When “The Moon” half of it kicks in, I think it’s a welcome counterbalance to that pacific sort of, I don’t know, “seaside” feeling of the first half. It’s just not what I was hoping for right off the bat.

Honestly, I think the first and second halves of this album should be reversed. With the exception of “Casual Party”, all of your typical B-sides are what lead off this album.

Conor: So what were the A-sides on the second half of this album, then?

Will: I thought the trio of “Throw My Mess”, “Whatever, Wherever” and “Country Teen” were where the album really hit its stride. At least where I recognized the Band of Horses of yore. A lot of Infinite Arms  and Cease to Begin there. Those three songs all the way to the end were where the album was most coherent, most focused.

Conor: I also like the way that “Country Teen” resists obvious genre-categorization. At first you see the title and hear the acoustic guitar strumming, and you think you know what’s coming. But the song you end with sounds more like a surf pop song. But not quite.

Will: Yeah, I’d say it’s my favorite song on the record. That genre fluidity combined with the unexpected chord and harmonies are pretty great. I think it’s the best example of them not getting in their own way. You get all the best elements of their sound, without it sounding like a bored rehash of their earlier sound.

Conor: Band of Horses not getting in their own way? Sounds like someone’s still bitter about Mirage Rock.

Will: I wish I could say I was bitter, but I always had the refuge of Infinite Arms. And after seeing the absolute joy and generosity that Ben Bridwell & co. bring when they play live, I never held it against him. Just spent the next few years waiting for another album. They were bound to stumble eventually.

Conor: Well, is this the return to form you were waiting for?

Will: I keep reading that exact phrase, “return to form”, in a bunch of reviews across the internet. I don’t think it’s quite that. I think it’s as high quality as their earlier albums, but I think they’ve turned 45 degrees or so in a new direction. Not departing completely, but not writing songs in a straight line that you could draw from their earlier albums.

Conor: I could get on board with that. In the end, I think there are still a few too many country snoozers on this album (“Lying Under Oak,” “Barrel House”) and a few too many pop tropes (the chorus of “Solemn Oath”) for it to rank amongst Band of Horses’ best.

Will: It’s definitely an album I’d like to see them play live. Altogether, I’m excited for future re-listens.

Conor: Agreed. I think what I love about Band of Horses, something that was mysteriously absent in Mirage Rock but that this album seems to have, is a sense of very thoughtful songcraft. It will be a pleasure to listen to these songs over and over again, even if it’s not while barreling down the freeway.

2 thoughts on “Rail Gaze Review: Why Are You OK”