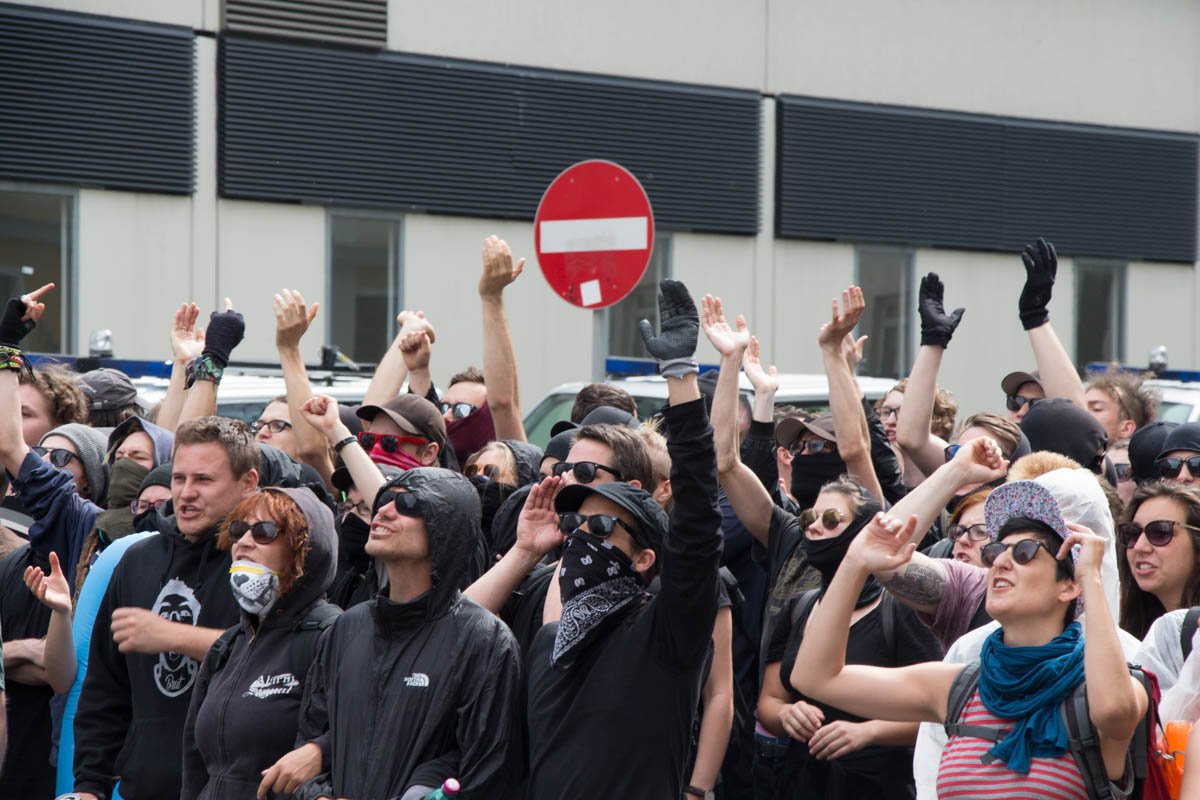 Anti-fascist activists on Feldenstraße greet their comrades down the street during a demonstration against the Identity Movement Austria on June 11. / Kyle Walker

The noise of the demonstration subsided to a dull roar. Occasionally the sharp “Bang!” of a teargas canister leaving a riot gun echoed through the streets of Rudolfsheim, Vienna’s 15th district. I walked down Löhrgasse to Felberstraße, turned left and saw a crowd of “Anti-Faschisten,” maybe 70 or 80 people strong, jogging down the street toward the Gürtel, where the ring-wingers of the Identity Movement Austria (Identitäre Bewegung Österreich) slowly made their way toward Westbahnhof. Vienna’s leftists had vowed to “never let the Fascists have the streets” and to obstruct the Identitäre’s June 11 march.

After a couple minutes, the march went past on the Gürtel, leftist protesters retreating before police, followed by the yellow flags of the Identitäre. At the sight of their comrades, the protesters on Feldenstraße took up their chant: Alerta! Alerta! Anti-Fascista!

When the march had passed and the chant died down, I heard someone address me: “Hey you with the camera!” (All this happened in German, so I’m a little hazy on the details.) I turned and saw three women among the protesters, faces covered to different degrees, giving me the bird. What they said next I didn’t quite catch, but it wasn’t friendly. It seemed they were upset with me because I’d taken their photo a few minutes before.

I doffed my hat and tried to justify myself: “The police have their own cameras.” Point being: you’re already on film somewhere. It seemed like every 15th police officer had a camera that day. They either didn’t care for my argument or they didn’t understand my broken German. Still glaring at me, then at the police and the right-wingers, they took up their next chant: Wir kriegen euch alle! (“We’ll get you all!”; also the title of the 1991 album by East German punk rock band Feeling B).

Strange to get lumped in with the police and the Identitäre, who like to chant “From Bregenz to Vienna, no muezzin!” and “Homeland! Freedom! Tradition!—Last stop for multiculturalism!” (it’s catchier in German). But it turns out that anarchists don’t like cameras, and I had every reason to know this going in. For example, I already knew that one Viennese anti-fascist group encourages you to blur the faces of activists in photographs. And I’d read “Snitches get Pulitzers” by Scott Jay at libcom.org when it was recommended by a classmate last year. Jay makes the point that activists involved in direct action often need to control media access to occupied places because they’re often engaged in illegal acts. (I disagreed at the time and still disagree with many parts of that essay).

Really, getting flipped off was a rather harmless way to be reminded that photographs aren’t always innocent, neutral records of reality. Sure, I’m there to document a political clash. But they’re there to overthrow the system, and being photographed isn’t necessarily part of the plan.

I’m accustomed when wearing my journalism hat to freely photographing crowds in public spaces. When things turn chaotic, I feel free to photograph individuals without first asking permission, something I would do in less frenetic circumstances. Protests lend themselves to dramatic photos of individuals doing brave, stupid, criminal, unjust or righteous things. Journalists seek out those shots because they tell the best stories, even if they are not representative of how most participants behave. But these images—dramatic photos of one, two or three people committing civil disobedience or in conflict with police—overlap precisely with those that activists find most threatening, because they could potentially identify activists to the authorities.

All the same, the best assumption that activists can make is that they are on camera all the time. It isn’t just journalists with big, fancy cameras who pose a potential threat, but activists and bystanders recording police misconduct with their phones, and the police themselves, of course. With smartphones ubiquitous, police surveillance constant, and journalists crawling the scene, activists must assume they’ll be recorded, and not always by sympathetic actors. The solution to the security risk posed by photography is not for journalists to stop taking photographs—after all, the police aren’t going to stop taking video—but for activists to wear masks, something many of them already do.

We wouldn’t allow the police such a privilege. Activists and journalists will all agree that the police have no right to decide who photographs them in public, nor to cover their faces (which doesn’t mean it doesn’t happen). They are public servants, representatives of the state whose livelihood comes from the community chest, and they must be held individually accountable. Activists are different. They are private individuals in a public space actively opposing the state, and it’s the state’s job to find out who they are if it intends to prosecute them.

Activists should cover their faces, and journalists should have no gripe. We’re used to navigating the tricky line between protecting privacy and reporting fairly. Photographing someone in a mask, particularly at a protest, actually poses fewer ethical problems than agreeing to quote a source anonymously: there’s no moral hazard, and the subject should reasonably know that they run the risk of being photographed. A sympathetic journalist might avoid taking compromising photographs, but activists have no special immunity simply because they’re engaged in legally risky behavior on behalf of a self-declared righteous cause.

For more (and better) photos of the demonstration, visit my portfolio page.