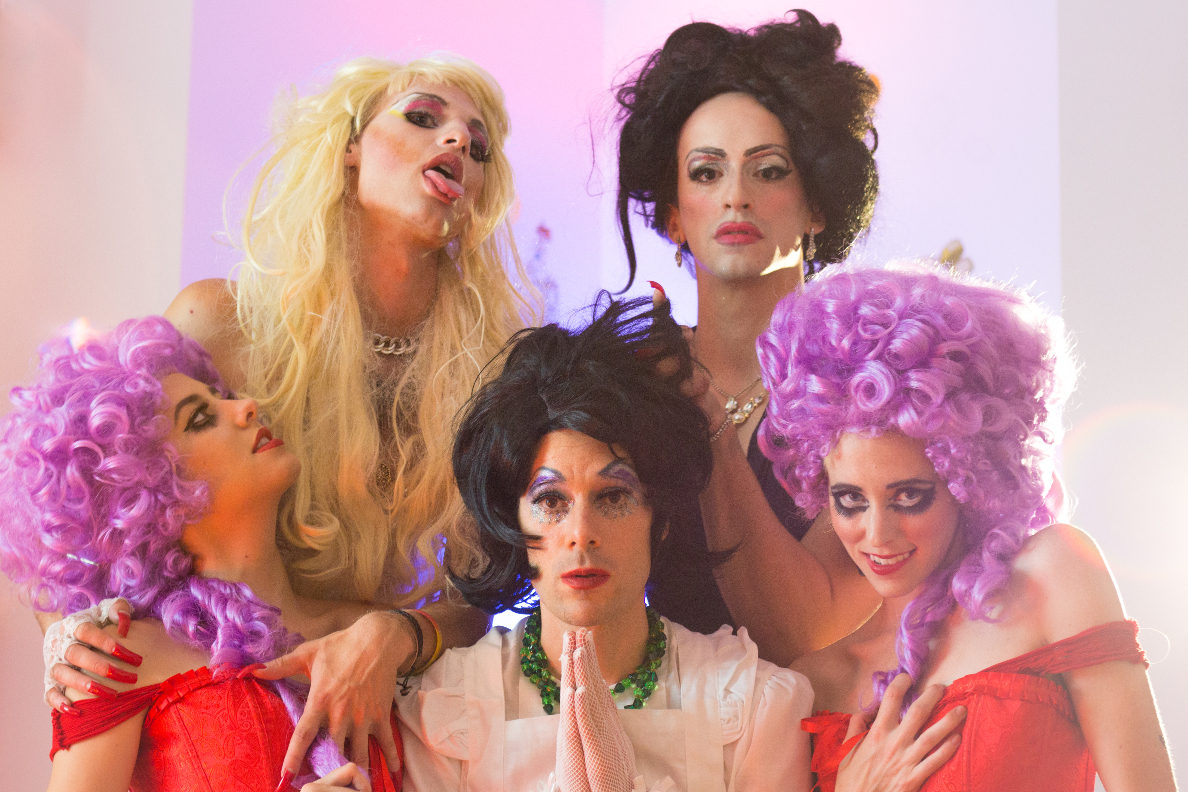 The below review was written by Will Boogert and Conor Fellin as they listened to of Montreal’s Innocence Reaches for the first time. They started writing when the album began, and stopped typing when the album ended. Except for grammar, the review has not been changed since that moment.

Conor: Not sure how I feel about this. Kind of sounds like half a thousand synth-pop records thus far.

Will: I suppose we’ll give it more than 30 seconds. But yeah. Heavy on the drum samples, and a huge departure from the rock sound of the last two albums.

Conor: I think there’s only a handful of people that would pick up a woman by telling her, “I want to relate.”

Will: It’s not clear if it’s actually working for him. Seems to be more of an introduction than anything.

Conor: Fair enough. Like that one really formal person at your high school parties who announces everything they’re doing as they’re doing it.

Will: I always associated announcing your actions with the ones who suggested shots at every college party. But this person on the album sounds much more stilted.

Conor: Did somebody say shots??? Shucks, we’re doing a review, so I can’t leave the computer.

Will: My fridge is empty anyway. One song down!

Will: There’s some real funk underneath this one. That’s more like it.

Conor: Yeah, funk made for some of the better moments of Hissing Fauna.

Will: I’ll agree with that. Well, this song doesn’t seem to be very charitable to gender stereotyping.

Conor: I don’t think I’ve ever heard it described that way. Also, I think Kevin Barnes is kind of stilted as a feminist. Even when he’s trying to talk about gender stereotypes, he’s talking about girls as “those other people over there.”

Will: Yeah: “They like chaos and mystery and try to combine them.” That doesn’t sound like anything but a woman on a pedestal.

Conor: “Though some women are demons, all of them are gods.” That’s revealing, and it doesn’t make Kevin look good.

Will: I mean, it’s not anti-woman. It’s kind of a strange stance. I wouldn’t say it’s a healthy one. Actually, the some women are demons line is bad. Moving on.

Conor: There’s that rock you were asking for.

Conor: Speaking of language, I think this may be one of of Montreal’s most self-aware titles ever. It’s sinister and also flippant, and it’s both in less than subtle ways.

Will: Agreed. It kind of comes across in the music too. They’re not wallowing in any real deep neurosis-stroking.

Conor: Any song where the backup singers repeat the title more than twice, you know they’re not taking it too seriously.

Will: That’s for sure. Especially in this goofy falsetto. This is a first song in the live set, I would think.

Conor: As in you heard that as a fact, or you’d like to see it?

Will: I’d like to see it. It kicks up the energy. Probably would have liked it as an album starter. Or an end of the set before the encore.

Conor: “She was a friend to me.” Someone’s gotten suddenly earnest.

Will: Yup. The mood has been all over the place on these first four tracks.

Conor: I’m ok with that though. It keeps our job interesting. I’m also ok with these psychedelic flutes.

Will: What is this weird victim-blaming in the lyrics? I don’t get it. (And me too.)

Conor: I mean if you can’t handle being in a relationship with someone who has baggage from abuse that’s one thing, but “Won’t you come around? / Can’t you change?” Come on Kevin, give her her space.

Will: Seems like he’s looking in the wrong direction. Man, we’re really letting him have it here.

Conor: Yeah, it might be a mistake to expect that Kevin would be anything other than a dick. This was the person who was going around at parties and somehow getting to know women well enough to dismiss them for not having enough “soul power,” whatever the fuck that means.

Will: Hey, this is an album review! No room for language like that.

Will: Reverb! Guitars! Drums! So, this seems to refer to a novel: Les Chants de Maldoror. Laughing out loud at this plot summary from Wikipedia: “The work concerns the misanthropic character of Maldoror, a figure of absolute evil who is opposed to God and humanity, and has renounced conventional morality and decency. The iconoclastic imagery and tone is typically violent and macabre, and ostensibly nihilistic.”

Conor: Oh my god, way to pigeonhole yourself, Kevin.

Conor: We should write that book.

Will: We should look into that for a future post.

Conor: Ooohh, I do like this bridge. Very frizzy.

“A Sport and a Pastime”

Will: “I wanna lose my ego. I wanna be possessed by you. I don’t care about my freedom. I just want to be yours, yours, only yours.”

Conor: I’m going to defend Kevin this time and say that’s a very sexy thing to say during an S&M session.

Will: I agree. And it’s better than saying “I want to dominate you,” maybe? But hey, if you’re into it, I’m not going to judge you. So I won’t judge him too much either. We’re just a couple of critics.

Conor: Well, which one’s better depends on what position you’re in. And to quote Kevin, “You’re above.”

Will: Well then yeah. I think it’s a sexy thing to say more than anything else–

Conor: Sexier than ANYTHING ELSE. THE SEXIEST THING YOU COULD EVER SAY.

Will: You’re being willfully obtuse. Sexier than it is degrading. I think with the right person, of Montreal could be used as babymaking music.

Conor: I think this ranks among my favorite electronic riffs in the album.

Will: In an album packed full of electronic riffs so far, that’s saying something.

Conor: The spritely keyboard riff, the trance-like verses, this song has a lot going for it.

Will: It has an uncomfortable tone to it. The “waiting for Sarah” vibe is clearly itchy for him to live with. It really comes across. Oh that bridge…..I like.

Conor: I started subtly dancing in my seat. It’s a rolling chair, so that’s a little awkward.

Will: If there ever was dance music for introverts…

Will: This song announced itself without much hesitation.

Will: I like how he’s getting on this person for being such a drag. It’s like, “Wake up, Kevin! Listen to your lyrics!” It makes me wonder if this is all some kind of self-flagellation.

Conor: I thought we agreed making fun of Kevin for his inability to deal with his partners empathetically was too easy.

Conor: True and yet somewhat solipsistic. Like other people’s suffering was ever trying to entertain you.

Will: That’s a very good point.

Conor: God, this song’s really growing on me.

Will: It’s kind of wandering through keys or something. Like it’s not rooted in one spot.

Conor: And it juggles all of the different keys and tempos so well. It makes me want to lie under a tree and get dizzy staring at the sun. Which I think may be the highest compliment you can pay a dream-pop song.

Will: No time for cloud-watching, we have to get into this…Bach-like guitar riff?

Conor: Bach, or maybe mid-career Beatles. With a sudden invasion of Magical-Mystery-Tour-era Beatles.

Will: Yeah, you’re right. Here’s a looser groove, but it does have that Beatles feel to it. Now everything dropped out for a few seconds…

Conor: Goddammit, Kevin, I liked that song. Give me a moment before changing everything up.

Will: You’ll have to go back to lousy with sylvianbriar if you want consistency through a song.

Conor: Also, can we talk about how ridiculous this song’s title is? I had to look up “arpeggiating,” but it means “play (a chord) as a series of ascending or descending notes,” which by definition can’t be chaotic.

Will: I think that beginning little fanfare was an arpeggio. And yes, I don’t hear the chaos here. There isn’t a whole lot of consistent structure, but it’s light years from chaos.

Conor: Is the title self-satirical?

Will: It’s really hard to imagine him titling this song without any self-reflection at all. There’s got to be a smirk behind it.

Conor: He had to know what he was doing, which really makes you ask yourself, why did he choose to do it?

Kevin: Hey guys, just wanted to chime in. Nothing really matters and my emotions are all over the place right now. So yeah. I mean, embrace nihilism and just stop trying to analyze everything so much, alright?

Okay, I’m off to a discotheque in the sky.

Will: Wow, he just disappeared as quickly as he appeared!

Conor: No, Kevin! We still have important questions to ask you!

Will: Too late, he flew away! We could have had an exclusive. Damn.

Conor: Breakmaster Cylinder was much more sociable, and we don’t even know who they are.

Will: But even after all of our Kevin’s-soul-searching, do we really know who this man is?

Conor: I think it would ruin the fun if we did.

Will: Oh come on now. You’ve just got to lie back in it. Remember laying under a tree and watching the sun? This is the same, only you have to close your eyes.

Conor: NO!!! Every time you close your eyes–lies! Lies!

Will: Yeah, I thought we were going up for a big drop there into the verse. But just a tiny one.

Conor: I just don’t have much to say about this song.

Will: What the hell is this song supposed to be?

Will: Feels like the Logic file full of all the unused loops and samples that didn’t make it onto the other tracks.

Will: Something that fancy people use to make music, I guess. I am not one of them, I only know one of them.

Conor: A decidedly dissonant set of sound effects to open our final track.

Will: I’m getting a Super Metroid vibe here. That game always freaked me out. There’s some tempo.

Conor: The image I’m getting is you’re in an alien spaceship, and you’re scared, because it’s an alien spaceship. But you are ascending, and you can’t help but be excited to be leaving your boring Earth-life behind.

Will: You can’t help but be excited for him. Even if he’s going to be tested, probed, and vaporized.

Will: I haven’t heard the lyrics really, but I’m going to say yes. “It’s not bad, it’s not sad, it’s fun.” Said in the most unconvincing voice ever.

Conor: Ok, looks like we have two minutes left. Final thoughts on the album?

Will: Well, I can’t really pick out a lot of memorable moments. It was here and there and back again. I’ve enjoyed it, but couldn’t tell you why. I think it deserves another listen though. You?

Conor: Are you saying reviewing albums on your first listen isn’t the most effective way of doing them justice??

Will: I am not saying that, because I enjoyed this and want to do it again.

Conor: I think it feels like a very definite step forward–